Currently, if tracks from a same album have different file formats, innuOS will create a separate album for each format. This was based on the premise that normally albums are in the same format but indeed there are cases where the same album can come in several formats, like a sampler album. It may also be a question of preference by the user to have some tracks available in high-res and others not.

Our approach will be the following:

This may, however, now show you duplicate tracks if you have different versions of an album with the same Album Artist and Album Title. To manage this, you can either delete the duplicated tracks if you don't want them or you will be able to use a new feature "Split Album" that allows you to pick the files you want and move them to set a new (or existing) album.

put all tracks under one album cover. anything else is a mess

I agree totally with your approach to aggregate all files, regardless of format, into a single album provided the individual albums continue to be played at their correct highest resolution format for individual tracks. The header showing "Multiple Format" is also supported.

Thank you for this thread. I just updated to the v2 software (I know, I am late) so I was horrified when my albums with more than one format had been split. I now see how I can use the Multiformat option to get them back together. However it is going to take me many hours to go through and fix them individually. Is there a default option which can be applied across the database? Surely this would be what the majority of users would want, I can't imagine why anyone would want it split by resolution?

it works now as described! Thanks a lot for the fast response!

In order to keep providing options for our users, this is not done automatically. You can now merge existing albums with different file formats into one by selecting the "Multiformat" option when editing an album. So if you have two albums of the same release one in CD Quality and another in High-Res, you can edit both albums and activate the "multiformat" option. This will merge all tracks, by Artist and Album Title.

Reading through the original approach, we did implement it a bit differently than explained above as the automatic aggregation would indeed cause those who prefer to keep the albums separate to having to specifically split them. We ended up implementing the other view - keep them separate by default but merge the ones you want to keep together as an album by using the multiformat checkbox on edit. Apologies for not having this corrected here before.

After update to 2.1.0 albums still show as split. I deleted the record and added it again, but result is the same, still split... What can i do??

Just updated to 2.1.0 and my albums still show as split. Would be best to remove and add back again? 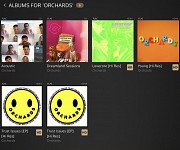 Status changed to: In progress

Whichever way you choose to jump, there will be some out there who wants it the other way. Perhaps your input process could recognise this (relatively unusual) situation prior to writing, pause then ask the user which way to proceed. This suggestion applies mainly to multiple file formats, but could also be tailored to help with potential duplicates.
Alternately, preferred actions for any of these situations (and more eg. different sample rates) could be pre-stored as user options at system level.

This would definitely work for me, thank you.

Merged with: Albums with both HD and flac

At the moment the system splits albums with different bitrates. Is it possible that an album can consist of multiple bitrates?

I was wondering if the deciding factor on which (local) files constitute an album could be the physical folder they are in. Perhaps not the most elegant solution, as the user would need to get involved at the file and folder level, but it would relieve the system of any "guesswork". (Perhaps your suggestion, Nuno, of a "Split album" feature works something along these lines?)

I quite like the way Roon handles this, showing just the one album but indicating there are multiple versions (including on server and on Qobuz / Tidal) and allowing one to see and select from them using a right click/button with drop down menu

It’s great how the app manages to group albums that belong to the same set even for ripped CDs. Great for operas for instance. It works most of the time. Some albums were not grouped however. Would the ‘spilt album’ feature allow to group also albums? Or is there a trick to fix when sets are split?

So how would this work with tags? I’ve worked hard to rationalise my tags but the same album from Qobuz or Tidal may have entirely different tags thus rendering a search by tag likely to throw up perhaps one of several formats of an album instead of all of them.

Other than that I would be in favour of this.

Albums from different sources (local, NAS, Qobuz, TIDAL) would still be created separately. Our view is that we still find useful to see that I have the same album from different sources - this can be filtered out if you don't want to see "duplicates". A different topic would potentially to have an option to choose if you want to integrate or not Qobuz/TIDAL albums in the music library at all (vs be seen only on Qobuz/TIDAL area) but that's a different topic...

Understand why you think that this solution may work. However please test it with a DSD file and a HD 96 file and select between them a few times. As you may well introduce loud "popping" noises which previously did not exist! I think it would be better to have the album recognised separately by the OS rather than the user having to "split" the album.

Pops due to the DAC changing the sample is a DAC-specific issue. The sample rate delay setting can help with these cases.

That would work for me - thank you. I have some sampler albums, and albums downloaded from Bandcamp, containing mixed sample rates/bit depths. Also some CD albums ripped to FLAC, where the odd track would not rip (on my PC) successfully, so I downloaded an MP3 track from somewhere to replace it. Where I have CD and Hi-res versions of the same album I modify the ALBUM (title) tag to suit.

This would be an essential feature as most of the music I listen to comes from Bandcamp and many albums there have different recording resolution from track to track. Aggregated files and multiple format label would be perfect for my needs. Thank you for thanking account of this minor problem.

I discussed this very issue with you during the remote session you conducted to fix an installation issue. The solution you suggest seems to be eminently sensible and would work fine for me and the number of mixed format albums I have.

I too have some classical albums with different sampling frequencies (most of them are from BIS). I think your approach would be fine for me. I also have the same album as a CD (ripped) and as a HD download. In this case I name the album which is ripped with the added "(rip)". I hope that this case will deliver separate albums in future too. I also have some in PCM and DSD format. In this case I add "PCM" or "DSD" to the album name.

Our initial solution was exactly to avoid that users would have to rename such albums - the system would do it automatically... But in this case providing more flexibility may mean more work needs to be done. But if having the same album in multiple resolutions is more the exception rather than the rule then it may be well worth it.
As long as the album title is different, it will always create a different album.

Status changed to: Under review